We all know compost is great for the garden, but did you know compost has a variety of uses in all sorts of environmental aspects! Compost can be used in four areas of ecological restoration:

Ecological restoration is the human-assisted recovery of a degraded, damaged, or destroyed ecosystem. Restoration efforts can span everything from revitalizing soil structure to reflect a site’s natural, original structure to reintroducing native plants and animals to an area. Of particular focus in this article are improving soil quality and health, wetland restoration, floodplain restoration, riparian restoration, and reducing global warming effects. If you think returning a disrupted soil to its endemic structure sounds like a job for compost, you’d be right! Let’s dig in to the four main ways compost can be used in ecological restoration.

Compost can aid in soil rehabilitation in a variety of ways and in a variety of soils. Everything from a clay-heavy soil, a sandy soil, and even soils altered by urban landscapes and dwellings can be rehabbed with compost.

In clay-heavy soils, bulk density can be high, water infiltration low, and nutrient availability can be a struggle depending on the type of clay found in your soils. While clay particles are small, they tend to clump together into large aggregates. When compost is added to clay soils, the organic matter in compost can essentially coat the large clay aggregates, helping to break them up. This increases water infiltration and soil porosity, giving plant roots access to plenty of water and air flow. Increased water infiltration and air flow also benefit those all-important soil microbes. Keep them happy and your soil and plants will thank you!

Conversely to clay, sand is a much larger particle. While clay particles tend to aggregate easily, sand is much more of a loner in the particle world. Think of squeezing a handful of wet clay and handful of wet sand. The clay will generally mush together, but the sand remains, well, sandy. Because sand doesn’t tend to clump together as easily, sandy soils have opposing issues to clay soils. Sandy soils often have trouble holding onto adequate water for plants to thrive, whereas clay soils tend to hold onto too much water and can drain poorly. Because sandy soils have larger particles, they tend to have decreased nutrient availability due to a lack of surface area, meaning fewer charged sites are available. Compost can help remedy both of these situations! Just like organic matter can help to coat the clay particles in clay-heavy soils, organic matter, or compost, can coat sand particles. In regards to water-holding capacity, compost amendments can provide the necessary bulk, nooks, and crannies to retain water molecules in soil for longer. In fact, compost can retain up to four times it’s weight in water, allowing much more to remain in the soil longer, keeping microbes and plants hydrated.

Soils depleted by urban activities, hardscaping, construction, tillage, or even plain ol’ landscaping and gardening can suffer from a variety of issues, like poor water infiltration, limited presence or complete removal of the A and O soil horizons (aka, the soil horizons that plants prefer to live in!), erosion, or compaction. In highly disturbed soils, poor water infiltration could be related to a hardpan clay layer, possibly caused by soil compaction from heavy machinery use, repeated tillage, or a previously existing poured slab for a structure. Clay is supposed to be good in soil, though, right? Yes, it can be! However, because clay has a net negative charge, it will bind very strongly to large, positively charged particles, like aluminum or iron. These particles in particular can be quite difficult to displace once occupying an exchange site due to their strong charge. A heavy clay layer can bind with aluminum and iron particles in the soil and create a very dense, nearly impermeable layer of clay, usually beneath the topsoil. Another practice that lends itself to hardpan production is heavy machinery and tillage, both of which also impact soil compaction. Repeated heavy machinery driving over grass will eventually flatten it; the same thing happens to soil particles! The air space (also called pore space) will be pushed out of the soil, creating a dense, heavy soil layer that is difficult to dig into and will support very little plant life. Compost applied before planting crops with large taproots (these can be vegetables or flowers), can help loosen compacted soil safely. Tillage is another big player in the soil compaction and hardpan clay production game. While tillage initially seems to fluff up soil, over time it actually fractures the soil, contributes heavily to soil erosion and topsoil runoff, and increases the mechanical impact of raindrops on soil beds. These might seem like inconsequential outcomes, but tilled soil particles can clog pore space deeper in the soil, resulting in impermeable layers of squished soil, causing soil and nutrient runoff, a halt in soil microbial activity, and poor downstream water quality. The good news is proper application of compost can help with ALL of these problems! Depending on the issue, small amounts of compost added regularly or large amounts added fewer times can help remediate these issues over time. Nothing is instant, of course, and whatever your soil’s history will affect the timeline.

Why are wetlands so important? They play a huge part in flood mitigation, water purification shoreline erosion protection, and host an incredibly diverse array of microbes, plants, birds, insect, amphibians, and mammals. In fact, wetland biodiversity is comparable to diversity of coral reefs and tropical rainforests! Wetlands also play an important role in many commercial endeavors, from shellfish and estuary fish, to cranberries, blueberries, timber, and wild rice. Aside from their commercial value, the flood mitigation alone is one reason to restore and protect wetlands. Wetlands act as a sponge for flood waters, naturally slowing the rise and expansion of floods. This protects floodplains and floodplain inhabitants in a way that can only otherwise be done with costly levees and dredge operations. As usual, nature knew the best way to handle things before humans interrupted. Luckily, we’re intelligent enough as a species to learn how to remediate our previous transgressions.

Wetlands are an incredibly complex ecosystem and remediation of wetlands is equally as complex. Wetlands absorptive power of floodwaters is derived from their naturally high organic matter content. As we know, compost is composed of organic matter and can retain up to four times its weight in water. Soil organic matter hosts a variety of activities, like providing for microbial biomass nutrients and water, providing plants with nutrients, and storing carbon. When wetlands are disturbed, much of this important soil organic matter is lost to oxidation, which in releases carbon previously stored in the soils into the atmosphere as greenhouse gases. Wetland remediation efforts are often aided by application of compost to remediation sites to replace soil organic matter, which can even be lost to some necessary remediation practices. Because soil organic matter is so crucial to wetland functions, it’s imperative to replace the organic matter. This is where compost comes into play; added compost to wetland sites can bolster the microbial biomass, help to store carbon, provide basic nutrients to newly added plants, increase soil moisture content, increase the water-holding capacity, and aid phosphorus sorption to soil particles. Phosphorus absorption, in particular, decreases phosphorus runoff and subsequent eutrophication downstream by sustaining water filtration.

Riparian zones are those areas of land directly next to water sources, like creeks, streams, and rivers. They are as diverse as wetlands, hosting many species of plants, animals, fish, and birds in different seasons and stages in species development, particularly those species whose lifecycles contain aquatic and terrestrial periods. In fact, many organisms that rely on riparian areas for food, shelter, or rearing young depend on reliable flooding and the flood mitigation riparian areas provide for downstream areas. You may be asking what the difference between riparian areas and wetlands are. Wetlands tend to be flatter, wider areas that host species suited to permanently water-saturated soils. Riparian areas are considered corridors that follow the water’s edge and link wetlands to water sources and floodplains, although some riparian areas meet criteria to be considered wetlands. Riparian soils can be saturated during flooding events, but do not stay saturated. Functionally, riparian areas are meant to provide areas of habitat, cover, erosion control, and flood control. Riparian vegetation is incredibly important to prevent flow of soil nutrients into water ways by acting as a “trap crop” to take up available nutrients and prevent downstream eutrophication. By growing in a bank area, riparian vegetation also acts as erosion control for soil near waterways, engaging soil particles in root mass, so they don’t wash away in flooding or rainfall events and streams can remain clear to promote aquatic life. This same vegetation provides shade and light control for waterways, keeping certain areas coolers, slower-flowing, and clearer for better light penetration, which provides small micro-climates within a riparian system to host a biodiverse array of life forms. Like wetlands, riparian area function in flood mitigation by slowing the flow of floodwaters, which in turn, lessens shoreline erosion and helps to mitigate downstream effects of flooding.

While subjected to nature’s own brand of degradation, riparian areas can become degraded due to recreational human use, construction, upstream pollutants, dams, or loss of stream-side vegetation. Due to compost’s ability to aggregate and bind soils, adsorb nutrients, and act as a water filter, it can be used in a variety of ways to aid in riparian restoration, including use in places to reduce the velocity of stormwater runoff near urban areas to better preserve native riparian areas. Common uses of compost in riparian prevention care include bioswales and biostrips, compost sheets, compost filter socks, and use in engineered soil mixes. Compost use in riparian restoration include use of engineered soils and compost application to banks to increase the organic matter content of water-bank soils, help re-establish riparian vegetation, and increase the water-holding capacity of riparian soils.

The easiest way to help restore ecosystems worldwide is to reduce carbon emissions overall! Less greenhouse gases releasing into the atmosphere, translate into a more slowly warming climate. Warming and changing climates are already showing evidence of more frequent natural disaster weather in an ever-widening range of impact. Aside from more severe weather occurrences, weather patterns, themselves, are changing in response to a warming climate, leading to issues like desertification and a loss of livable areas and arable farmland. As a modern society, we need reliable weather patterns to grow crops, arable farmland to grow them on, and safe places to live. Direct effects of changing weather patterns and climates can be seen in human migratory patterns, increasing frequency of immigrants fleeing climate-caused natural disasters, and the resulting food and potable water scarcities.

One easy change to reduce your personal carbon footprint and the carbon footprint of places like stadiums, universities, neighborhoods, and cities is to compost! Food waste sent to landfills isn’t managed in a way conducive to carbon sequestration, landfill lifespan, or water and air quality. Landfills actually provide up to 17% of U.S. methane emissions, a greenhouse gas with eighty-six times the warming power of carbon dioxide (when measured over a 20-year period). Food waste that is sent to a composting facility can be properly managed and recycled into a usable soil amendment that can be applied in a variety of situations, from your backyard garden to the wetland protecting your home from annual floods. 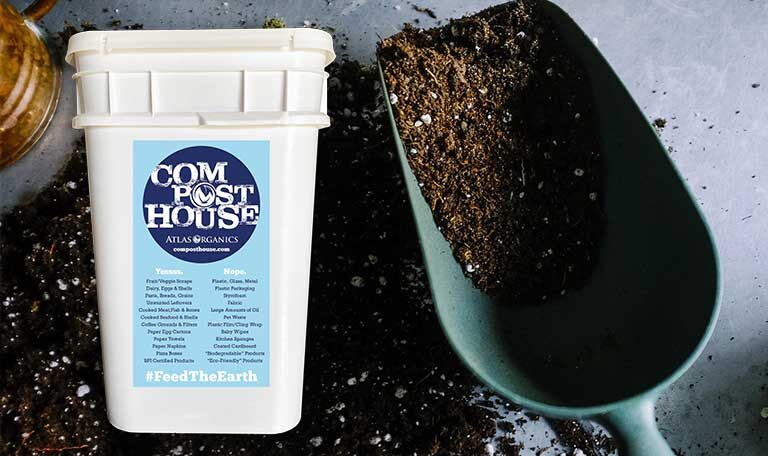